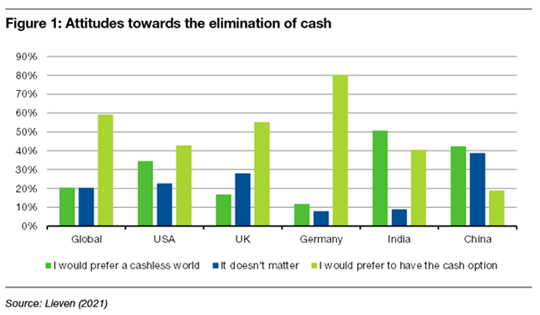 Of course, we are far from this scenario, because cash is still in widespread use in most countries. However, I think that, even if the use of cash declines, it will still be very hard -- not to say impossible -- to abolish physical money.

I searched the internet for studies on people’s attitudes to using cash and came across this survey of c.10,000 people in 24 countries and their attitudes towards using cash. Part of the survey involved asking people in each country whether they are open to living in a world without physical money or whether they would at least like to have the possibility of still using it. And it turns out that by an overwhelming margin of 3:1, people would like to keep cash instead of abolishing it altogether. 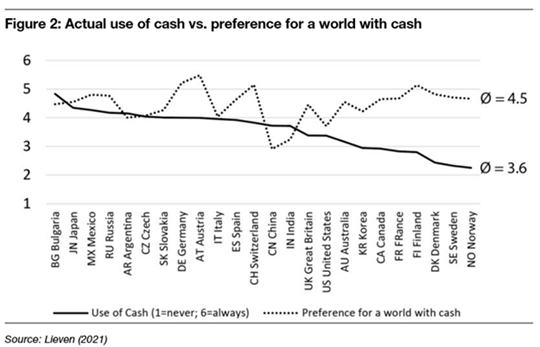 But attitudes about the elimination of cash vary quite a bit. In Anglo-Saxon countries and Scandinavia, people said they would like to be able to use cash because it gives them a feeling of freedom and individualism. After all, nobody can control how you decide to spend your money. Meanwhile, in Eastern European countries and Latin America, the ability to hold physical cash provides mostly a feeling of safety because nobody can take that cash away from you and it has a stable (nominal) value. Given the history and political situation in many of these countries, this impulse to hold cash as a safe portable asset is understandable. And in Western European countries the attitude towards abolishing cash is particularly negative because, here, both the freedom argument and the safety argument rate highly, though not as highly as in the two other regions individually. The fear of surveillance and the need for stability and safety are particularly pronounced in Germany, Switzerland and Austria – the three countries with the highest aversion to the abolition of cash.

And then there are China and India, the only two countries where there is a plurality in favour of abolishing cash.

One might say that in China the use of cash is in fast decline, and that people just got used to not having cash. However, when looking at the use of cash in daily life there and the attitude towards the abolition of cash there is actually no visible trend. The aversion to abolishing cash is just as high in Sweden and Norway as it is in Japan and Mexico, though cash usage is vastly different.